So far we've only printed with PLA filament. It prints at lower temperatures than ABS, has no odor while printing, and supposedly is stronger than ABS. We've gotten most of our filament from Ultimachine and have printed in red, silver, black, yellow, green, and purple. They all print extremely well, have consistent diameter (~2.85mm) and most stuck to the bed easily.

We started off printing straight to our glass bed (it's plain old glass not borosilicate glass). Our hot end was set to 185C - 190C and the bed to 55C (we measured the bed with a thermal gun and got 60C with the software setting of 55C).  Things went well for a while but then we started getting curling as we started larger prints. We pulled out the temp gun and the bed was reading all over the place +/- 10C. We turned the bed setting up to 60 - 65C with a little improvement. The silver was giving us some grief not sticking to the bed very well.

Around that time we bought some blue PLA off eBay. It's a great color with a little translucency and it was a lot cheaper than Ultimachine. It has a diameter of ~3.0mm so we had to make a new materials setting in KisSlicer (one for the eBay, one for Ultimachine). We were excited to start printing with our new color but that excitement quickly soured. We could not get the blue to stick to the bed with any consistency. We started playing around with the temperatures and made a little progress but still very inconsistent results.

Eventually we covered the glass with Kapton tape and that seemed to help out with the blue and it solved most of the problems we had with the silver as well as the curling.  Currently we're printing the eBay blue PLA at 210C for the first layer, 190C after that and a bed temp of 75C-80C.  Our Ultimachine PLA prints at 185C with a bed temp of 65C.

Regardless of the temperatures you end up with, proper cooling is extremely important. You want the PLA to cool as soon as it's out of the hot end. We have two 40mm fans blowing at the hot end but are still planing to try some fan ducts to focus the air better.

I won't say the PLA we got from eBay (which most likely came from China) is bad but it's definitely more fussy than the Ultimachine PLA. If you're just starting off, go with filament you know will print easily, get your printer dialed in, then experiment with the cheap stuff.
Posted by Unknown at 1:02 PM No comments:

I've added 2 new pages to the blog. The tabs are located at the top of the page. One page for all the custom printer parts we are designing and one page for just fun stuff we print.
Posted by Unknown at 11:05 AM No comments:

We started off printing some feet we found on Thingivers (http://www.thingiverse.com/thing:15880) to raise the printer, but with 4 of these in place it didn't provide much stability. 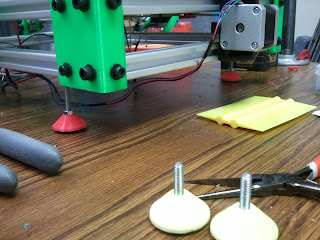 With my handy dandy new OpenSCAD skills, I designed some basic legs that would attach diagonally across each corner. These provided much more support and we were able to adjust the back left leg so the power supply could rest on it. 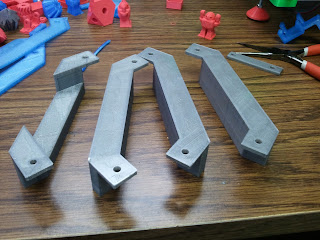 Here they are mounted to the printer.  They're a bit slippery on the bottom so we may add some rubber feet to them. Download the files from http://www.thingiverse.com/thing:51895 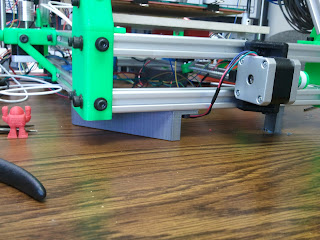 Again, here's the power supply and relay prior to mounting. 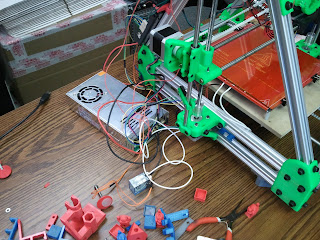 Here's a shot below the bed so you can see where the power supply is going. The cutout leg is in the back corner and blue parts are printed clips that screw into power supply and clip on to the extrusion frame. Currently only the side clip is being used. After attaching the back riser we realized the back clip won't fit so we'll need to make a slight design change. 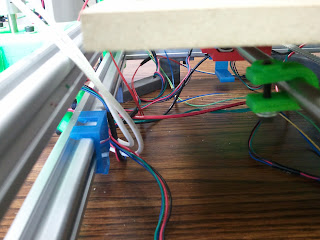 A few pictures of the power supply and relay mounted. The relay is attached to the front leg with double sided tape. 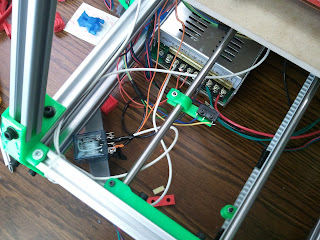 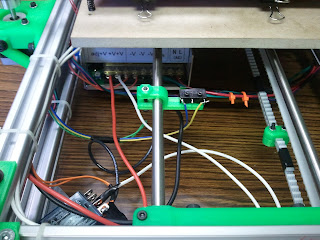 After mounting the power supply we rerouted all the wires and used cable ties to keep things a little more tidy. Here's where we're at now. 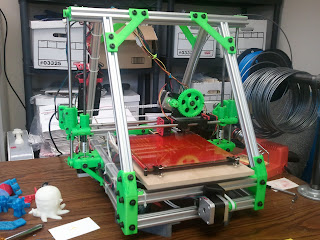 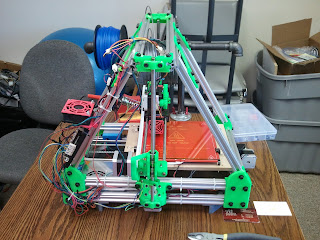 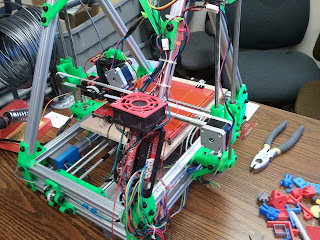 I just started working with OpenSCAD this week and so far it's a lot of fun. I don't have the patience to work with 3D graphics editors so it's a great alternative if you know even the most basic programming concepts.

You can download OpenSCAD from http://www.openscad.org/ and here's an online manual
http://en.wikibooks.org/wiki/OpenSCAD_User_Manual/The_OpenSCAD_Language

Here's my first attempt at a miniature robot, meet SCADBot 1.0! His butt is a little saggy in this print, but we're still trying to figure out the best temperatures to print this blue PLA.  You can download this little guy from http://www.thingiverse.com/thing:50858 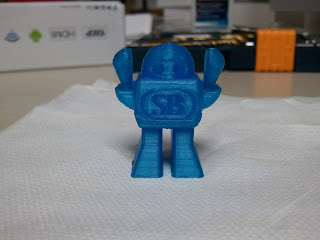 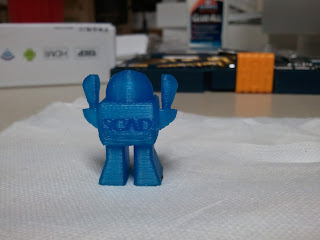 On another note, we just finished mounting the power supply to the printer and have cleaned up the dangling wires.  A detailed post with lots of pictures will be coming in a few days.
Posted by Unknown at 6:25 PM No comments:

One annoying thing we found was that the Sanguinolulu board was pulling power from the USB cable even when the main power was off. The USB cable sends 5V from the computer which was enough to light the LED and keep our fans spinning (slowly).  Previously we would just disconnect the USB cable every time we turned off the printer and reconnect it after turning it on. 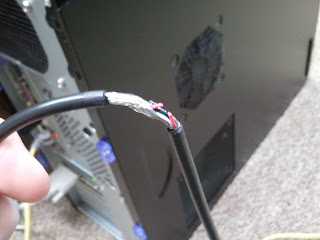 Posted by Unknown at 3:31 PM No comments:

One of our main goals was to clean up all the loose wires and make the printer more self-contained. We started by printing a mount for the Sanguinolulu board and a 60mm fan mount shown below. There was a fan mount on the case originally but it kept breaking so we decided to mount the fan separately using a clip-on style mount. You can find both of those on Thingiverse at http://www.thingiverse.com/thing:45764 and http://www.thingiverse.com/thing:45847 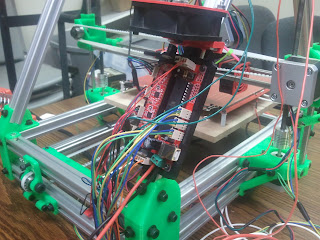 Next, we wanted to mount the power supply underneath the printer. We bought a switch for the power supply and created a mount case for it so we could attach it to the frame. This was also my first model done in OpenSCAD. Available at http://www.thingiverse.com/thing:49542 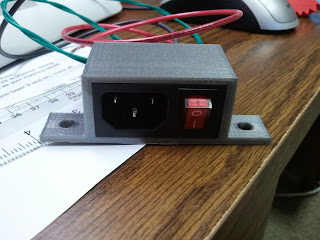 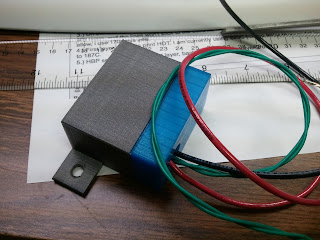 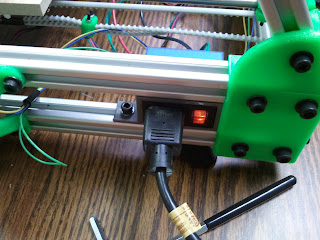 Posted by Unknown at 5:25 PM No comments: